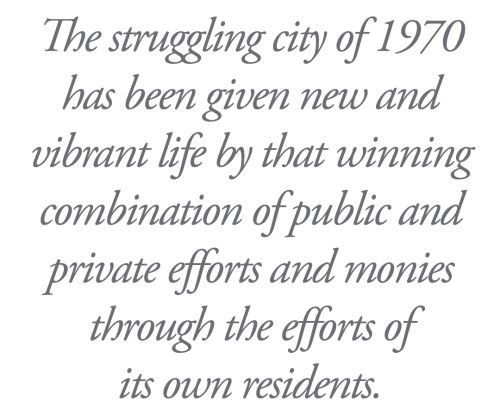 The historic preservation movement in the United States is often said to have begun with the fight to save Pennsylvania Station in New York City, which was demolished in 1963. For Saratoga Springs, the watershed moment took place in February 1968, when concerned residents came together to halt the attempt by a chain called Dutch Inns of America to build a 150-room hotel in the city’s Congress Park. The company was taking advantage of an ill-conceived piece of legislation conjured up by city fathers in 1957 to increase the dwindling stock of hotel rooms.

There had been other glimmerings of awareness and concern in the city. Late in 1965, preservationist John G. Waite pointed out to the Historical Society of Saratoga Springs the importance of such landmarks as the Batcheller Mansion and Franklin Square. The following year, Bea Sweeney, who was a member of the society, prepared a successful application to have Franklin Square listed on the National Register of Historic Places. The square was threatened by a proposed arterial highway. Sweeney and others derailed the arterial proposal, and avoided splitting the city in half.

During the 1970s, a number of additional crises galvanized Saratogians into creating a successful preservation movement. During the planning phase for the nowdefunct Pyramid Mall just north of city limits, business leaders recognized that it would be likely to damage downtown. A group of civic leaders initiated the Plan of Action to seek ways to revitalize downtown through community dialogue and planning. Urban renewal was well underway and alternatives to it had been given little consideration. Julie Stokes, a transplant from the Midwest, helped form a historic preservation committee. When Mayor Watkin appointed Bernard Donovan, retired New York City schools superintendent, to run the city’s Community Development Program, Donovan hired Stokes to manage the preservation component. At the same time, city native and realtor John Roohan stepped in to market the 82 foreclosed Verrazano College buildings (the former Skidmore College campus centered on Union Avenue) – and did so successfully.

Throughout this exciting period, a group of new young residents including Mark Straus, Tom Gardner and Bob Bristol chose Saratoga as their home and invested in downtown real estate, taking calculated risks – as did the Adirondack Trust Company, which loaned them the money. Pioneering individual investments included the D’Andrea brothers’ Old Firehouse Restaurant, Bill Van Bunscoten’s creation of the Downstreet Marketplace from a vast vacant storefront, Brian Dwyer’s rehabilitation of 328 Broadway, and Bob Israel’s extensive restoration projects in Franklin Square.

In 1977, the city-funded Saratoga Springs Preservation Foundation was organized. It was deemed necessary in order to oversee facade easements for downtown. In the same year, a stronger architectural review law was passed by the city. 1977 represented a remarkable groundswell of support for preservation.

Under the leadership of Stokes and her successors, the Foundation hurled itself into a four-fold mission: education, technical assistance, advocacy and physical restoration. One of its early successes was a $43,350 grant towards restoration of the former Verrazano College buildings that had been sold to private owners. It sought, and gained, federal recognition for seven historic districts, adding to three secured by Beatrice Sweeney. Its education program developed many components, including technical assistance, color charts, a marker program, organized tours, lectures and publications.

By the late 1990s, historic preservation was widely acknowledged to be one of the foundations of the city’s resurgence. National awards came from the National Trust for Historic Preservation: the Great American Main Street Award, the Great American Places Award, and the Dozen Distinctive Destinations Award. These were followed by federal designation as a “Preserve America Community”.

Another example of a for-profit restoration project is the masterful adaptive re-use by Tom Roohan and Sonny Bonacio of the Van Raalte Mill on High Rock Avenue, which they beautifully restored and converted to multiple uses in 1999.

In the new century, the Foundation continued to take a leadership role in two challenging but critical preservation projects. The Universal Baptist Church on Washington Street had been deteriorating rapidly, and by 1999 it was no longer safe. Skidmore’s Tom Lewis and developer Jeff Pfeil launched the non-profit Universal Preservation Hall, which secured funding for its restoration and conversion to a performing arts center. Next, the Foundation stepped in to assist the neighboring First Baptist Church with the preservation of its superb 1855-56 Greek Revival building.

The Saratoga scene of the 1960’s was one of illegal signs, unsightly billboards, rubble-strewn vacant lots, and vacant storefronts. The struggling city of 1970 has been given new and vibrant life by that winning combination of  public and private efforts and monies through the efforts of its own residents.