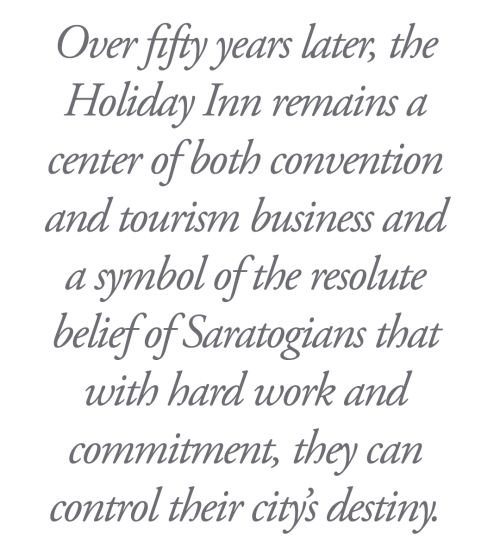 Saratoga Springs’ Holiday Inn looks like many up-to-date hotels, but it has extraordinary historical significance. Tom Clements, one of its founders, has called it “the start of bringing the community together and proving to ourselves that such a project could be done.”

After the long disruptions of the Depression and World War II, Saratogians expected things to look up. For a short time they did. But changing vacation patterns and the loss of its illegal (but tolerated) gambling casinos, followed by the demolition of its last great hotel, the Grand Union, in 1952-53, left the city in a depressed condition.

The August racing season remained a bright spot, but old Saratoga had been a three-season resort and a convention destination – and it no longer could compete. Not only was it without a large banquet facility after the Grand Union Hotel dining room came down, but it had lost about a thousand of the bedrooms it had boasted in 1935. Even worse, only 43 percent (792) of its rooms were heated, and many of the hotels, heated or unheated, were antiquated, without private baths. Even though it was still operating the 3,820-seat Convention Hall, the city averaged only nine conventions annually in the late 1950s.

A 1956 attempt by the city fathers to lure hotel investors by offering a land lease in Congress Park proved divisive. In its place, a number of leading businessmen developed a proposal that caught everyone’s imagination.

A Chamber of Commerce committee contracted with Hockenbury Systems, Inc. of Harrisburg to study the need for a new hotel. When its report was received in May 1961, city businessman Tom Ashton and insurance man Tom Clements proposed that residents raise the money to build a new, first-class “convention hotel.” A pamphlet they developed and circulated to promote the idea stated, “The comforts of a well-appointed Convention Headquarters Hotel will induce the citizens of the world to gather within our gates.” Tom Ashton led the charge to convince the community to go ahead, saying, “This hotel [idea] has been kicked around for 10 years or better. Well, it’s about time we stopped being scared about it and did something about it. Let’s at least try.”

In less than a month after the report was received, on June 5, the men organized “Saratoga Springs Community Hotel, Inc.” with Ashton as a founding director along with Clements, builder W.J. Grande and Sarto Smaldone, owner of the Malta Drive-In. They proposed a financing plan in which the corporation would sell 15,000 shares of stock at $50 each. Along with a $750,000 first mortgage, this would fund the anticipated $1.5 million construction cost of the convention hotel.

The executive committee’s strategy was to involve as many members of the community as possible in an investment opportunity, rather than by asking for donations.

Seventy-nine residents pledged money toward the cost of fund-raising, and the executive committee began recruiting the 300 campaign workers.

The drive then moved into its “general sales campaign” with a goal of $200,000. Skidmore College invested $25,000, and the Adirondack Trust Company offered a $25,000 challenge on top of its initial investment. On November 22, the second phase was completed successfully with $300,000 in cash and pledges on hand.

Many of the buyers were certain they’d never recoup their money. Even at the time, news reports said, “Many people are treating the pledge as a ‘gift.’” Tom Clements said years later, “I think most of them just felt that this was a contribution to their city and they had no idea that they would ever get their money back [to] say nothing of getting eight times their money back.” Clements remembered the investors “were for the most part working people: waitresses, teachers, bartenders, truck drivers, from all walks of life, who felt that they wanted to have a piece of the action. Many of them sacrificed to buy stock; they did it on the installment plan, $10 down, $10 a month, until it was paid.” Nearly 1,500 people, almost all of them Saratogians, became shareholders.

Late in 1962, the leaders met with Kemmons Wilson of the Holiday Inn Corp. at his Memphis office, and on November 12, Wilson made a whirlwind tour of the city with Ashton, Clements, and Mayor James Benton. Wilson agreed to build, equip, and operate a new 150-room, 750-banquet-space hotel – Holiday Inn’s first convention-oriented facility – with funds raised locally.

In the summer of 1963, the corporation conducted the final phase of the drive. In July and August, workers secured another $104,000 in pledges; State Bank of Albany (now Bank of America) agreed to a $750,000 first mortgage; and on September 10, demolition on site began. Saratoga’s new Holiday Inn opened August 15, 1964, proving to the small city that it could accomplish almost anything.

In July of 1981 a group of New York investors, Saratoga Pelican Associates, bought the facility for $2,800,000, and the stockholders received $436 for each $50 share they had taken almost 20 years earlier.

Five decades later, the Holiday Inn remains a center of both convention and tourism business and a symbol of the resolute belief of Saratogians that with hard work and commitment, they can control their city’s destiny.