The Saratoga County
Chamber of Commerce

Photo courtesy of the Saratoga County Chamber of Commerce. 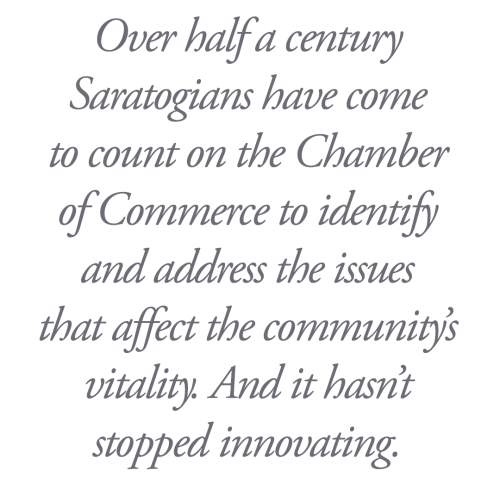 Throughout the past fifty years the Saratoga County Chamber of Commerce has led the successful grassroots efforts that made Saratoga Springs the envy of other small Northeastern cities. The story of that leadership is one of hard work, innovative methods, inventive programs, and persistence.

The Chamber’s origins date back to 1918, when business owners came together to promote tourism, attract convention business, stimulate economic development, and coordinate their efforts in retail promotion, special events, and beautification—all standard chamber of commerce concerns.

By the 1950s the city’s economy was in tatters, but its residents determined to rebuild it. Local fundraising during the 1960s achieved remarkable successes, building the Holiday Inn, the Saratoga Performing Arts Center, and the Broadway YMCA. Coupled with the effects of the Northway (1963) and the new Skidmore College campus (1966), these community-funded institutions sparked a renewed optimism. During the same years the Chamber, which had not yet become involved in downtown redevelopment, organized hundreds of residents to identify the problems facing the community. And just at that moment, its director left to take a new position.

It was a small operation, two and a half staff positions in a modest storefront office on Broadway just south of Phila. A young Siena College graduate and veteran Marine Corps Captain named Joe Dalton became a candidate for the opening. He perceived an upturn in the city and agreed to take it, with the understanding that it was a two-year trial. He stayed over forty years.

Almost immediately, the business community got behind the difficult work of planning for change. Dalton met with 35 leading businesspeople over two weekends, directing breakout sessions that reported back with ideas which were converted into a plan and budget by Dalton. A few years later similar methods were used to drive the Chamber’s Plan of Action, which turned around the downtown economy.

The Chamber also took gambles in areas that would never before have been its concern. In the early 1970s members realized the city had a drug problem. In the absence of an effective government response, the Chamber began educating the public and ran three seminars on the issue, attracting hundreds of residents. As a result, city Public Safety Commissioner Ken King approached Dalton about confidential funding for an undercover agent, since such an agent couldn’t be kept confidential if funding passed through City Hall. Dalton went to the treasurer of the Chamber, got the $4,000 cash on a handshake, and 64 criminal indictments were secured on individuals and businesses in the city.

In many areas the Chamber has been able to work effectively with government or quasi-government agencies, extending its reach while leveraging action that benefited the county’s economy. The long-projected City Center was identified as a top priority by both Mayor Ellsworth Jones and the Chamber in 1980. The Chamber researched similar convention centers, contacted national hotel chains to secure a hotel component, and worked with the city, the county, and bankers to invent a unique financing package.

Some years later the Chamber, at the request of county Supervisor Fred McNeary, made Saratoga County an offer it couldn’t refuse: to take responsibility for tourist promotion at no charge to the county government. The Chamber quickly doubled the number of inquiries from potential visitors.

The 1980s decade witnessed a number of new programs under the oversight of Linda Glazer Toohey, who had come to town as publisher of The Saratogian. Joining the Chamber as executive vice president, she strategized with Dalton to create a new program to train community leaders. The annual six-month-long Leadership Saratoga has educated over 700 participants in local affairs along with such skills as grant writing, public speaking, board operation, and budgeting.

Toohey also launched the Saratoga County Arts Council, and for many years managed the Chamber’s film commission. She hosted potential movie directors, developed print materials, and arranged room rebates to cover expenses. A number of famed Hollywood movies including Ghost Story, Billy Bathgate and The Horse Whisperer were made in town, and pumped millions into the county.

Always supportive of NYRA, whose impact on the city’s economy is broad and deep, the Chamber has repeatedly provided expert testimony in its favor in Albany. In the 1990s, NYRA was having difficulty with the bottom line of its spring and fall training season, losing as much as $660,000 each year. The Chamber developed a plan and ran training for a year, making it so efficient that NYRA gladly took it over the following year under the same plan.

At the request of the county’s employment and training division, the Chamber initiated an on-the-job training program in 1980s. In cooperation with the county Board of Supervisors, the program took well over 1,000 individuals off unemployment and welfare rolls.

This highly innovative Chamber always goes beyond what is good for individual businesses to identify what is good for the community. That led to its most heartwarming effort in its history, the 2001-02 respite program for police and firefighters impacted by the World Trade Center attacks.

Elliot Masie of the Masie Center, who had been in New York City to reorganize computer systems after the attack, made a suggestion to Dalton and to Charles Wait of the Adirondack Trust Company. Together they called a meeting of representatives of business, charity and government. The idea of a respite was born. To assure it was a true community effort, companies were not solicited for cash; instead, residents could participate at any financial level starting at $4.00— and thousands did.

Limited to 200 families, identified by their New York City police and fire unions as having someone deeply affected psychologically by their work at the site of the towers, the program provided an all-expenses-paid three-day stay in Saratoga any time during 2002. Hotels, restaurants, taverns and attractions offered accommodations, food, beverages and activities, all at no charge to these visitors. With community residents acting as hosts, volunteers Ed DiMiceli and Peter Crowley coordinated all visit details. In order to protect the families’ privacy, the media was not notified of any arrivals. Each participating family was given $100 in cash so not even a gratuity would come out of visitors’ pockets. It was Saratoga Springs at its finest.

Today the Chamber is a highly-developed organization with a membership of over 2,000 and a staff of eleven. It continues to coordinate tourism promotion for the entire county and to run Leadership Saratoga. It maintains community calendars and an important web page, and handles consumer affairs and the Healthy City initiative. It represents its members—and the community—on legislative issues. Having led efforts to establish Saratoga Economic Development Corporation, the City Center, and the Private Industry Council, it continues to work with other organizations to improve the quality of life for all county residents

Over half a century Saratogians have come to count on the Chamber of Commerce to identify and address the issues that affect the community’s vitality. And it hasn’t stopped innovating.