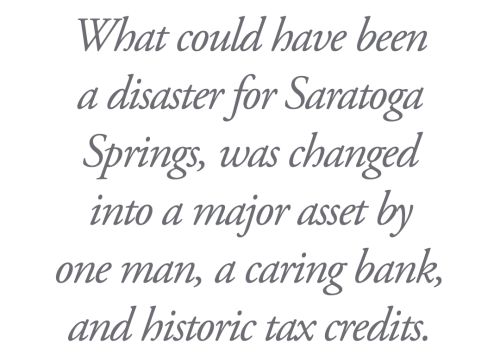 Union Avenue is one of Saratoga’s two great residential streets, one of many grand results of the boom years after the Civil War. First built through farmland from Circular Street to Saratoga Lake in 1841, it was intended for such recreational uses as carriage drives from Congress Spring out to the lake on its east end.

It was improved in 1870-71 to create a more magnificent approach to the 1864 racetrack, a true boulevard with a grassy strip down the center. Soon great houses were underway on either side, most of them built by Saratogians who took advantage of the summer rental market, a few by summer residents. The street was the site of only one hotel, the Kensington (1881-1909), which stood on the northwest corner of Court Street.

For decades Union Avenue was also the heart of the Skidmore College campus. By the end of the 1930s, the school owned 42 buildings. Its final number was 82, 19 of which were on Union Avenue – large and distinguished structures for the most part, many of which became homelike dormitories.

But as grand as Union Avenue had once been, by the mid-1970s many of its structures stood abandoned and in disrepair. It took the ingenuity and vision of a native son, John Roohan, to return the grand houses to private ownership and full restoration, creating the elegant avenue we know today.

The college added one large new building to the avenue, Moore Hall, the six-story dormitory built in 1958; faced with pinkish stone, the so-called “Pink Palace” was supposed to have a feminine color scheme. A 1960 college master plan proposed building other multi-story dormitories and classroom buildings on the avenue. In 1971 the administration chose to market the old campus on Union Avenue to another educational institution. Verrazano College, chartered in 1961, was an idea without a home. Its concept was a 1,200 student body pursuing a four year liberal arts degree with one of the years spent in the Mediterranean.

Although the college opened in the fall of 1974, “it was nothing but a real estate deal,” said its former president, Aldo S. Bernardo, the following June after resigning. In June 1975 Marine Midland Bank filed foreclosure on the mortgage.

The city woke up with a shock to the deteriorating situation. A bank holding a non-performing asset normally makes a quick sale. That, as Charles Wait of the Adirondack Trust Company says, “had all the potential for [slum] conditions.”

The buildings were in poor repair and mostly too large to become private homes. What was worse, none had its own furnace. They were served by a central heating plant. At this critical moment, John T. Roohan stepped into the breach and came up with a remarkable solution.

A native of Spring Street who had worked in construction with W.J. Grande and Son, Roohan knew the city, the real estate market, and construction techniques. He was appointed by the court as receiver in bankruptcy, and immediately began maintenance and leasing. He then convinced Marine Midland to let him market the 82 old campus buildings, rather than taking the easier method of unloading them to a single buyer.

A panel of realtors estimated it would take 10 years to sell all the buildings, during which 30 to 40 percent of them would deteriorate beyond restoration. Within two years, Roohan had sold every building except the gymnasium and the theater – and these, too, eventually sold.

While many of the houses were too large for single-family use, the new buyers retained the character of the buildings and the Victorian feeling of the neighborhood. The largest project was the Skidmore Apartments just off Union Avenue, a project by investors who bought 18 buildings, renovating 12 of them (the other six were demolished for parking).

The effort created 183 apartments in what were ultimately 16 buildings; each apartment is unique and attractive, and 40 years later they remain in high demand.

What could have been a disaster for Saratoga Springs, was changed into a major asset by one man, a caring bank, and historic tax credits.